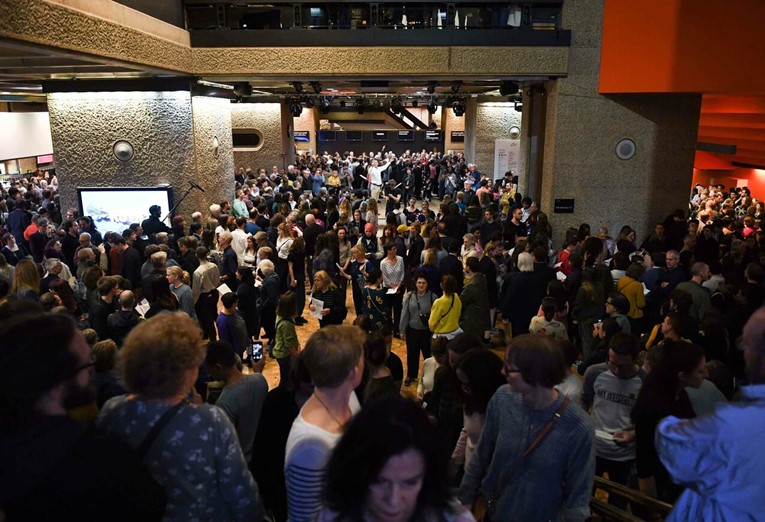 March was a very busy month for me. Aside from the usual Monday night choir rehearsals, I’d managed to book something almost every evening as a way to distract myself from the political shambles that is Brexit, which we all know was due to happen at the end of the month. It seems to have done the trick because it’s now April and nothing seems to have changed…

Anyway, for me, March consisted of a choir performance with Kensington Singers where I had a solo 😱, going to a couple of recordings of QI (one of which was the Christmas special – I know, this is March), watching some films from the Banff film festival, dinners out, a comedy night, joining the Put It To The People March, working on 6 Music Festival as a video publisher, trying out the Pandemonium Drummers, and somehow I still managed to fit in 8 evenings for a pop-up volunteer choir to perform a piece called the public domain by David Lang.

Wow, that was a long sentence. I said I was busy!

I heard about the opportunity to sing at this special event from my conductor at Kensington Singers, who had posted a link to it on my choir’s Facebook page back in December. The sign-up page looked like this:

Be part of something big this spring, as 500 people from all walks of life come together for a once-in a lifetime performance at the Barbican Centre.

Whether you’re a first-time singer or regular choir member, the London Symphony Orchestra and Choral Director Simon Halsey are inviting you to join over 500 people from across London to perform the UK premiere of David Lang’s the public domain. As a vocalist you’ll sing, whisper and chant together under the guidance of a dedicated vocal leader, telling a story through sound and movement and drawing together shared experiences into an exhilarating and exciting performance.

The three groups will then come together for two final rehearsals, before the piece is performed live in the Barbican foyers on 24 March 2019 as part of a London Symphony Orchestra performance.

I couldn’t quite imagine what it would sound like, but it seemed like an exciting opportunity, so I signed up! There were different rehearsal groups that we could sign up for: I picked the group that rehearsed on Tuesdays and Thursdays because that fitted best with my schedule. 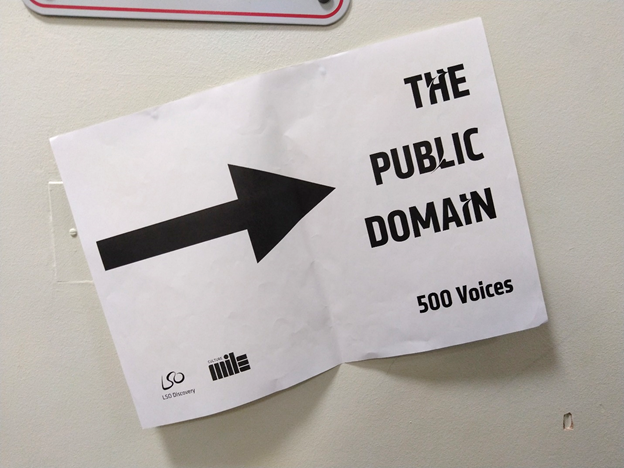 I turned up to the first rehearsal a little late, just as David Lawrence (our group’s conductor) was giving an introductory speech.

“If you’re looking for something completely different, you’re in the right place!”

He got that right.

Turns out there were 5 different rehearsal groups, each containing about 100 people. Each group had its own conductor and an assistant conductor, and we also had a lead conductor who was responsible for moving all the groups through the 12 parts of this piece.

It took me a while to realise that most of the people in the group I was singing with were from the London Symphony Chorus! I thought everyone there had just signed up in the same way I did, but it turns out that for them this was just part of their regular rehearsal schedule.

The rehearsals were really good fun. Our conductor was clearly out of his comfort zone as some of the directions in the piece required him to sing or shout through a megaphone while moving about the performance space: not a usual task for a conductor! His directions to the choir were unusual too, we often broke into fits of giggles.

Singers from LSO Discovery & around London joined us for our 1st first rehearsal of @Davidlangmusic’s piece #thepublicdomain: uncontrolled giggling in the sops & David Lawrence @Davidlmusic, declaring that he felt “Edgy and Unstable”. @londonsymphony@BarbicanCentre #500voices pic.twitter.com/HkNdxzL4PB

In a first for any choir performance I’ve been involved in, we were actively encouraged to carry on singing if we couldn’t remember a line. We were given such directions as “sing strong and wrong” and “if you sing the wrong words, it’s not a mistake, just a moment of creativity”.

The moment @jdeapperley has apparently been waiting for all his life (involving a megaphone) happened at tonight’s rehearsal of @Davidlangmusic’s piece. “It sounds SO wrong it sounds right.” he told us. #thepublicdomain @londonsymphony@BarbicanCentre #500voices @davidlmusic pic.twitter.com/9yJf0VHA95

Certain parts of this piece required us to sing phrases on pitch, but out of time with each other. It meant that every member of the choir was doing their own individual thing, but when hundreds of people are all behaving the same way, you get some beautiful resonating chords that flow around the space.

The piece, having been written with novices in mind, was not particularly complicated to sing. But it became clear very quickly that the most complicated part of the performance was going to be following your conductor when you’ve got 4 other groups of people in the same room singing something else. We practised that by regularly splitting the rehearsal group into 2 and getting them to sing/shout different parts.

Until this point, we had not rehearsed with any of the other groups. Then on the Thursday before the performance, 3 of the 5 groups met in the same space. There was even a photographer there to capture these great pictures! 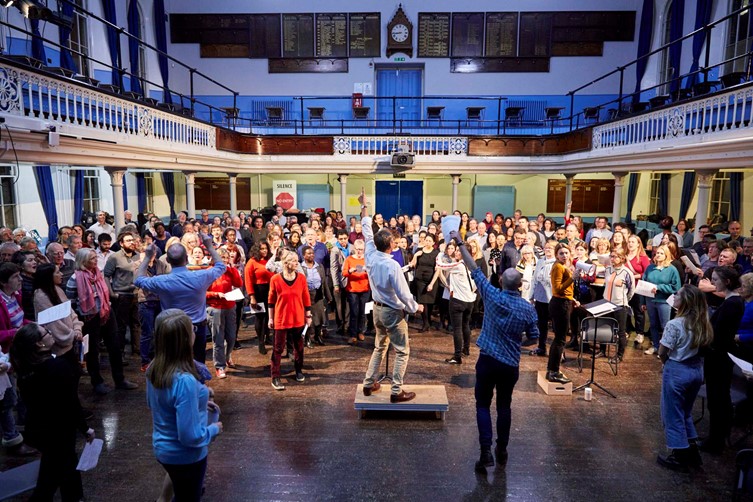 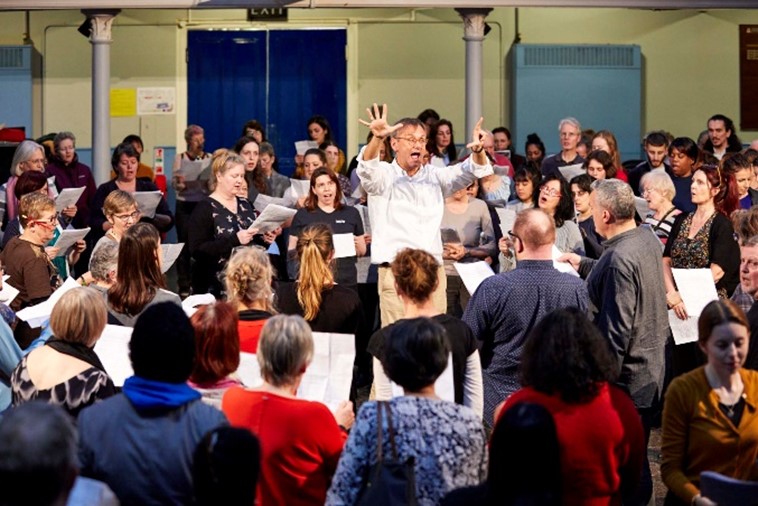 All those photos were borrowed from the London Symphony Orchestra website.

We finally got to rehearse at the Barbican Centre the day before the performance. It involved all 500 singers for the first time. We descended on the venue on the Saturday afternoon and got singing quickly, unnerving some young families and people working on laptops who clearly weren’t expecting us.

I walked into the middle of a rehearsal for something @barbicancentre , something to do with “passion”! #performance #barbican #london #passion #arts #rehearsal pic.twitter.com/L4tXgGwYRr

We were performing in the Barbican foyer rather than on a stage. That way the audience would be at our level, free to walk around and within the different groups. But with 500 performers, it looked like there wasn’t going to be much spectating space!

For the first time, all 500 of us rehearsed together in the same space. How are the public going to watch this? Who… twitter.com/i/web/status/1…

On performance night, I was amazed to see just how many people had turned up to watch. The performers had been instructed to wear what we wore to our first rehearsal – a mix of formal and less formal clothing – so that we would blend in perfectly with the audience.

We started at 6pm with a subtle signal from the conductors. The piece started with the quietest of whispers, so the audience didn’t realise we’d started until a few minutes in! This was by design of course.

Part-way through the piece we walked from the balcony to the lower-ground floor while following our group’s conductor. David was singing phrases through a megaphone and we clapped after each phrase. It felt similar to the Put It To The People march that I attended just the day before. Downstairs we could all ‘fit’ around Simon (the lead conductor) to perform some simple but powerful harmonies while other performers were shouting over the top. This was also by design.

The performance itself was chaotic but brilliant. It lasted about 40 minutes and after the 8 rehearsals I’d almost managed to remember all the words! Some people in my group found it difficult to see either of our conductors for the sheer number of audience watching. That wasn’t too much of an issue because our timing didn’t have to be perfect – if you couldn’t see you could just follow the people who could!

I find it really hard to describe what our performance would have been like to watch. It was recorded and I hope the video will be made available soon. To give you an idea of the chaos there is this video of the same piece performed by 1000 singers in New York. However I think it would definitely have been better to experience it in person to hear each individual as you make your own way around the space.

It was great to be singing with the London Symphony Chorus, and I was definitely made to feel welcome in their rehearsal group, but as an outsider it felt to me like they saw this as “just another performance”. They were a little more formal than the other groups which had been formed specifically for this performance, so no team selfies from my group. Team green however:

Are we ready #teamgreen ? Can’t wait for #thepublicdomain at the Barbican 6pm with our team leader @jdeapperley #greenpower 💚 💚 💚 pic.twitter.com/7K3UVbWMSt

All in all though, this was a fantastic project to be involved in and I’m so glad I volunteered to join it. I’d definitely do something like this again. Bring on the next random opportunity!

UPDATE: Here’s the video from the performance, in mini-documentary style, and a list of everyone involved.