I’ve made a couple of updates to trntxt since July.

One of the things I noticed during my user tests was that people typed ‘bristol’ when they wanted information about Bristol Temple Meads, Bristol’s main station. Unfortunately ‘bristol’ is a closer match to the smaller Bristol Parkway station because it comes above Temple Meads alphabetically. Before August, there wasn’t a way to get the user to correct their search, but trntxt now has search suggestions!

The feature was implemented while being moderately inebriated by a single bottle of Henry Weston’s at the Meanbee hack night in Bath.

Now if you go to http://trntxt.uk/bathspa/bristol it will ask you if you meant Bristol Temple Meads instead of Bristol Parkway.

The other new thing is journey times. Trntxt now shows you how long each journey takes, so you can identify the faster trains more easily. The number is calculated with preference to the estimated timings, so if a train is delayed, the time will adjust accordingly. 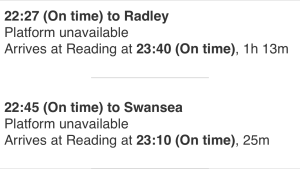 Next logical step – sort by arrival time instead 😉

I’m also looking to make trntxt’s suggestions cleverer. I’ve started collecting data about the devices that use the site and the inputs people give. I’m hoping to expand that to also collect and store data from the National Rail Enquiries API. Don’t worry, the information collected is not personally identifiable (unless your user agent string is “HI MY NAME IS DAN”).

Hopefully, after some more practice with MongoDB I’ll be able to draw conclusions predicting the stations people mean based on their input. For example if someone types /bristol/london, they probably mean London Paddington, whereas /southampton/london should take the user to London Waterloo instead.